Eye grabbing white, pristine clarity, cut for brilliance and color play,  this important secondary market Diamond delivers the Full Monte.  The diamond information on this site will answer many  questions,  but only viewing this diamond tells its story, for scheduling  use contact page on this site.

Click upper right hand navigation bars  to get around this site.

Click here for a PDF of the GIA Diamond Certificate

There is Art in a Diamond Deal!  This Big Brilliant Cushion Cut faces up white and clean.  Diamond are priced to a great extent by grade.    All diamonds graded J color do not look at all the same. A diamond with a color grade J can be closer to I in color, or closer to K in color. The same idea is true of clarity.  Certificate grades are bestowed by Gemological Institute of America graders who do everything in there power to make objective determinations. Let me just say it is not as easy as it sound. Understanding such nuance makes the difference between a great value and not.   This diamond offers great value. 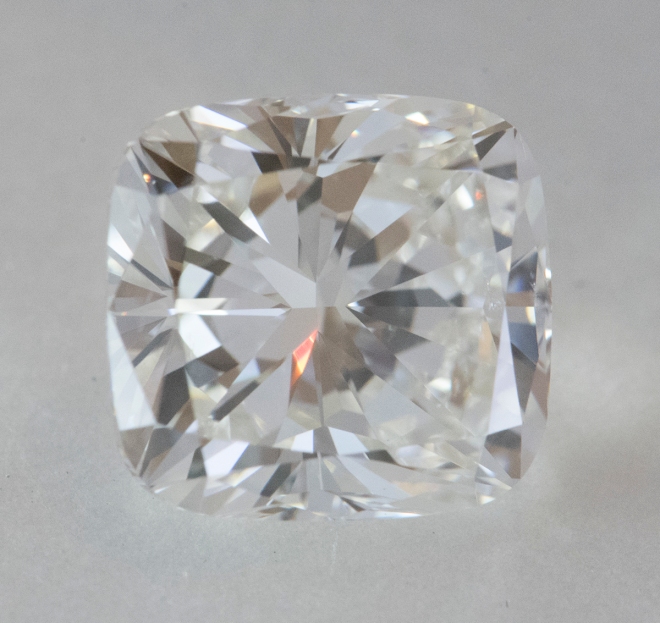 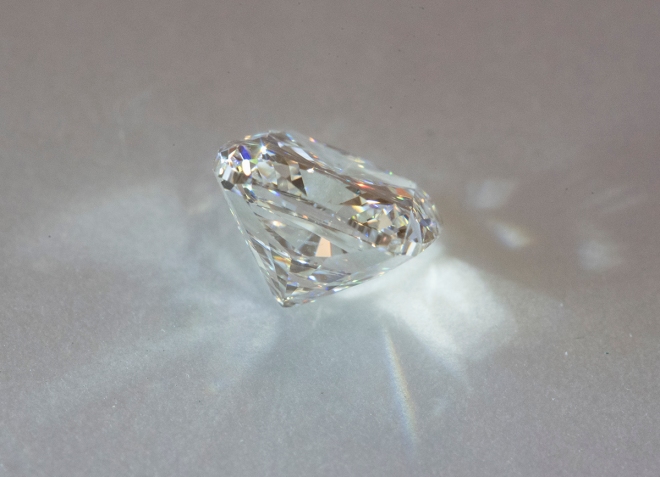 Link to the pdf of  this diamonds GIA certification 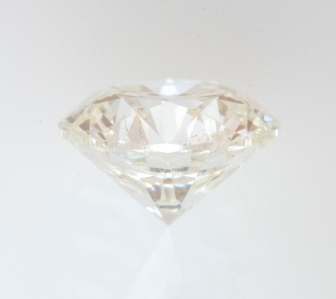 Link to PDF of Gia certification

You probably know that a Gift of a diamond is a likely Win!

Perhaps you missed these memo’s

She who from April dates her years,
Diamonds shall wear, lest bitter tears
For vain repentance flow; this stone,
Emblem of innocence is known.

Diamond verse from the Gregorian birthstone poem printed in Notes and Queries, May 11, 1889.

THE HISTORY OF THE DIAMOND AS AN ENGAGEMENT RING
A man presents his prospective bride with an engagement ring upon acceptance of his marriage proposal. Anthropologists believe this tradition originated from a Roman custom in which wives wore rings attached to small keys, indicating their husbands’ ownership.

In 1477, Archduke Maximillian of Austria commissioned the very first diamond engagement ring on record for his betrothed, Mary of Burgundy. This sparked a trend for diamond rings among European aristocracy and nobility.

The sentimental Victorians popularized ornate engagement ring designs that mixed diamonds with other gemstones, precious metals and enamels. Often these rings were crafted in the shapes of flowers and were dubbed “posey rings.” Diamond rings crafted during the Edwardian era continued the tradition of pairing diamonds with other jewels, commonly mounted in filigree settings.

The opening of the DeBeers mines in Africa made diamonds more accessible. In the 1930s, when demand for diamond rings declined in the U.S. during hard economic times, the De Beers Company began an aggressive marketing campaign using photographs of glamorous movie stars swathed in diamonds. Within three years, the sales of diamonds had increased by 50 percent.

In 1947, De Beers launched its now classic slogan, “A Diamond is Forever.” This campaign spurred even more sales. The implied durability of a diamond conveyed the meaning in the American psyche that marriage is forever. A diamond’s purity and sparkle have now become symbols of the depth of a man’s commitment to the woman he loves in practically all corners of the world.

Finally,  I am blogging on a series of diamonds that are on offer this month!

These sites are clearing facilities, working on a percentage. They don’t buy and sell, what they do is post listing from their network of vendors, who along with listing the diamonds, assign the price and ship the diamonds directly to the diamonds  the buyer.  These sites offer a return period, after which, if the diamond has not been returned, they pay the vendor, if it is returned, they ship it back to the vendor,not paying the vendor and return the money to the consumer.

These sites are very carefully to represent only the information from the certification to the consumer. They make no guarantees beyond the return period. It is the sole responsibility of the buyer to  confirm that the diamond they recieve is what they bargained for. The buyer must then, either return it in the period allowed for returns, or keep it.  After the return period the buyer has little or no easy recourse if a problem with the diamond arises.

This 5.05 Carat VS1 I color Diamond (actual image of this diamond above) was recently Recut to optimal standards for this diamond and GIA certified. The current Rapaport high wholesale NY asking price is 30k per carat.  Please make serious inquiries through the contact page.